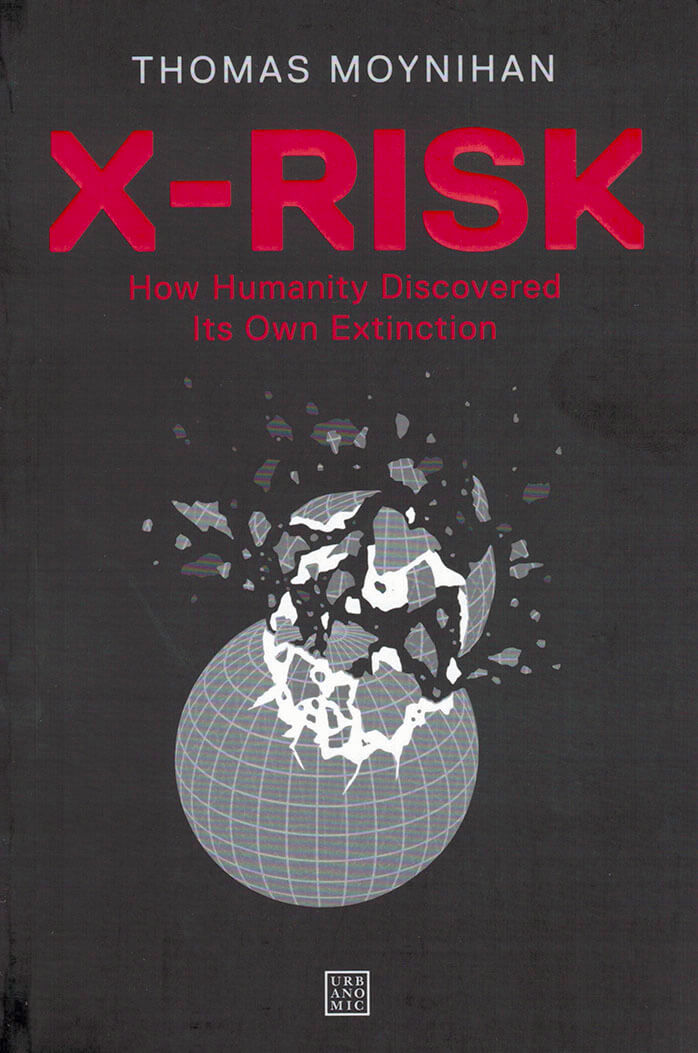 From forecasts of disastrous climate change to prophecies of evil AI superintelligences and the impending perils of genome editing, our species is increasingly concerned with the prospects of its own extinction. With humanity's future on this planet seeming more insecure by the day, in the twenty-first century, existential risk has become the object of a growing field of serious scientific inquiry. But, as Thomas Moynihan shows in X-Risk, this preoccupation is not exclusive to the post-atomic age of global warming and synthetic biology. Our growing concern with human extinction itself has a history.

Tracing this untold story, Moynihan revisits the pioneers who first contemplated the possibility of human extinction and stages the historical drama of this momentous discovery. He shows how, far from being a secular reprise of religious prophecies of apocalypse, existential risk is a thoroughly modern idea, made possible by the burgeoning sciences and philosophical tumult of the Enlightenment era. In recollecting how we first came to care for our extinction, Moynihan reveals how today's attempts to measure and mitigate existential threats are the continuation of a project initiated over two centuries ago, which concerns the very vocation of the human as a rational, responsible, and future-oriented being. 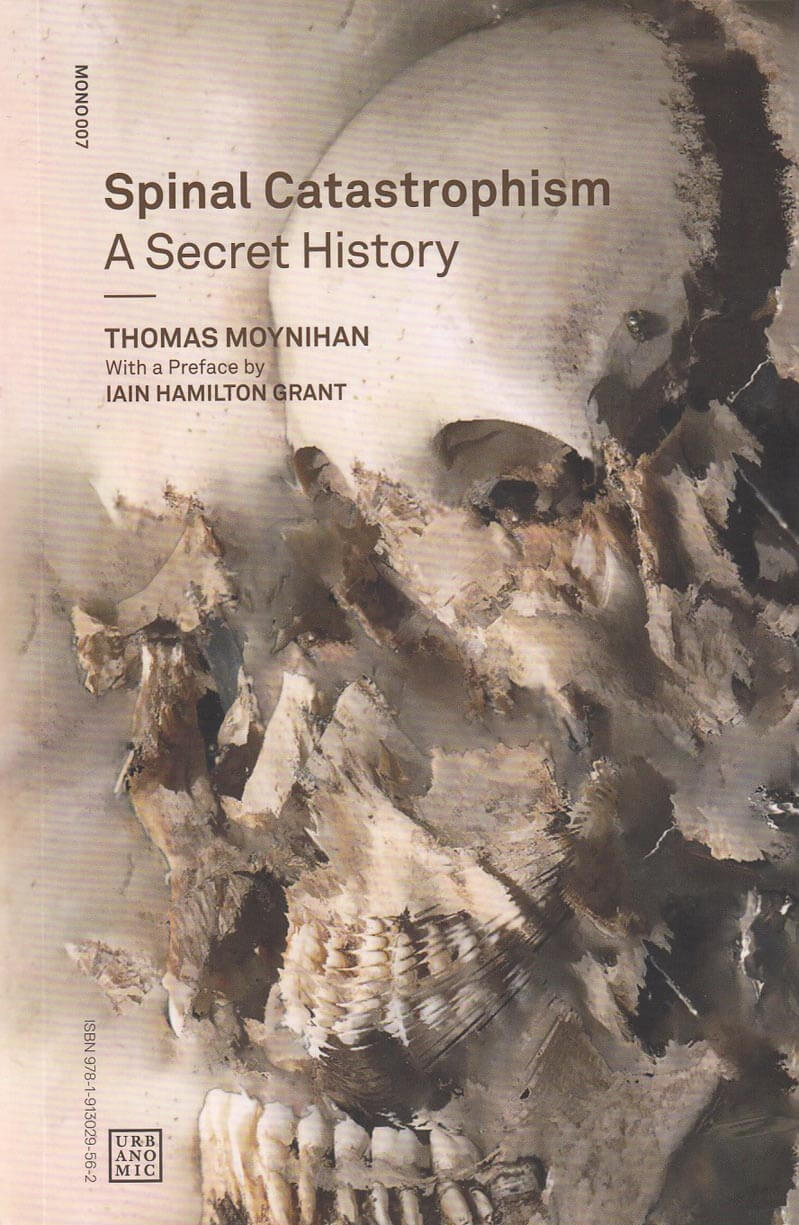 Drawing on cryptic intimations in the work of J. G. Ballard, Georges Bataille, William Burroughs, André Leroi-Gourhan, Elaine Morgan, and Friedrich Nietzsche, in the late twentieth century Daniel Barker formulated the axioms of spinal catastrophism: If human morphology, upright posture, and the possibility of language are the ramified accidents of natural history, then psychic ailments are ultimately afflictions of the spine, which itself is a scale model of biogenetic trauma, a portable map of the catastrophic events that shaped that atrocity exhibition of evolutionary traumata, the sick orthograde talking mammal.

Tracing its provenance through the biological notions of phylogeny and "organic memory" that fueled early psychoanalysis, back into idealism, nature philosophy, and romanticism, and across multiform encounters between philosophy, psychology, biology, and geology, Thomas Moynihan reveals the historical continuity of spinal catastrophism. From psychoanalysis and myth to geology and neuroanatomy, from bioanalysis to chronopathy, from spinal colonies of proto-minds to the retroparasitism of the CNS, from "railway spine" to Elizabeth Taylor's lost gill-slits, this extravagantly comprehensive philosophical adventure uses the spinal cord as a guiding thread to rediscover forgotten pathways in modern thought.

Moynihan demonstrates that, far from being an fanciful notion rendered obsolete by advances in biology, spinal catastrophism dramatizes fundamental philosophical problematics of time, identity, continuity, and the transcendental that remain central to any attempt to reconcile human experience with natural history. 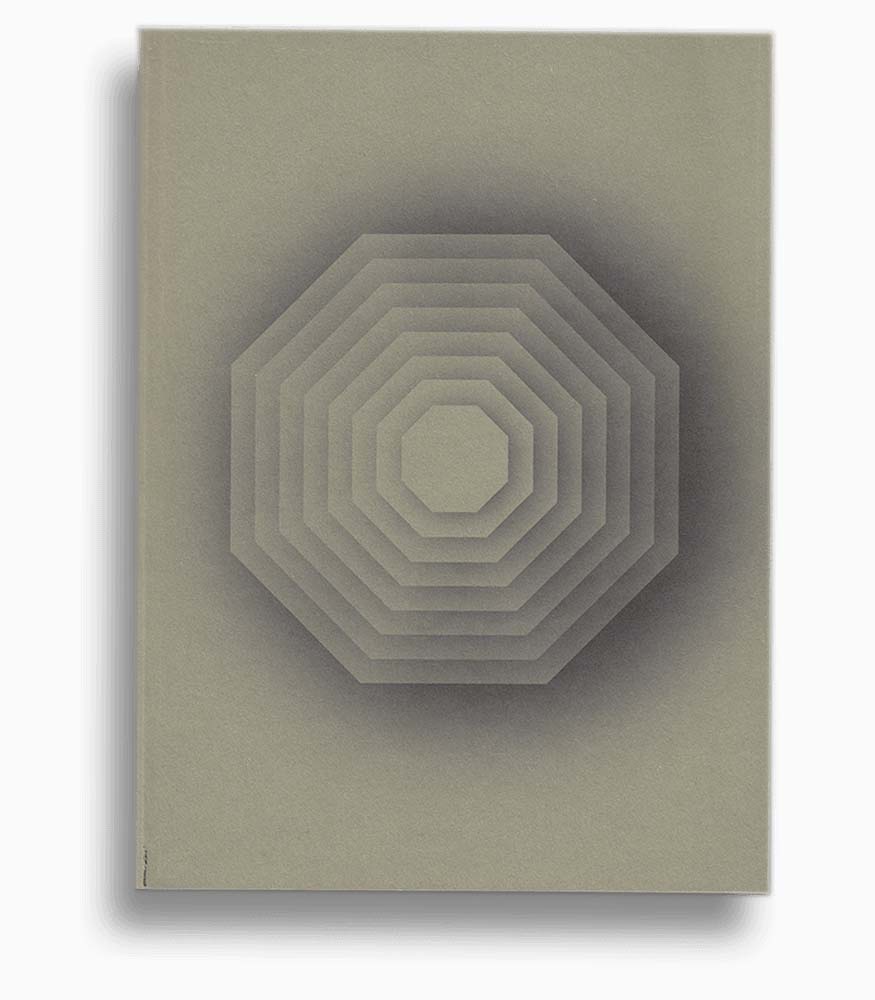 For as long as recording and communications technologies have existed, operators have evoked the potential of sound, infrasound, and ultrasound to access anomalous zones of transmission between the realms of the living and the dead. In Unsound: Undead, contributors from a variety of disciplines chart these undead zones, mapping out a nonlinear timeline populated by sonic events stretching from the 8th century BC (the song of the Sirens), to 2013 (acoustic levitation), with a speculative extension into 2057 (the emergence of holographic and holosonic phenomena).

For the past seven years the AUDINT group has been researching peripheral sonic perception (unsound) and the ways in which frequencies are utilized to modulate our understanding of presence/non-presence, entertainment/torture, and ultimately life/death. Concurrently, themes of hauntology have inflected the musical zeitgeist, resonating with the notion of a general cultural malaise and a reinvestment in traces of lost futures inhabiting the present.

This undead culture has already spawned a Lazarus economy in which Tupac, ODB, and Eazy-E are digitally revivified as laser-lit holograms. The obscure otherworldly dimensions of sound have also been explored in the sonic fictions produced by the likes of Drexciya, Sun Ra, and Underground Resistance, where hauntology is virtually extended: the future appears in the cracks of the present.

The contributions to this volume reveal how the sonic nurtures new dimensions in which the real and the imagined (fictional, hyperstitional, speculative) bleed into one another, where actual sonic events collide with spatiotemporal anomalies and time-travelling entities, and where the unsound serves to summon the undead. 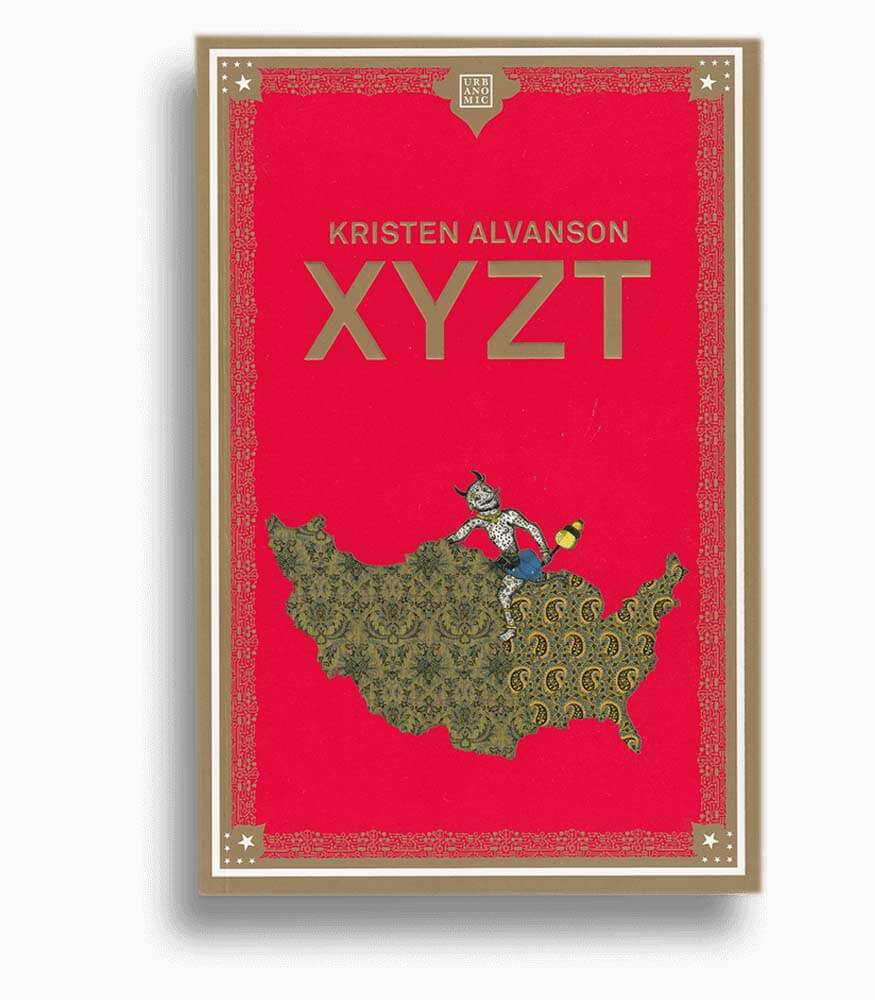 Based on the author's experiences of living as an American in Iran, Kristen Alvanson's XYZT is a wildly imaginative dramatization of the idea of a "dialogue of civilizations" and its potentially outlandish ramifications. As part of an advanced technological test program, volunteers are shuttled back and forth between the US and Iran, hidden from the watchful eyes of immigration police and state bureaucracies. Each is given a single opportunity to be received by a local host and to have a brief authentic experience of what it means to live as “them” before being transported back home. But far from heralding the bliss of mutual recognition, the experiment unleashes a series of displacements so disorienting that the fabric of reality begins to fray. Ordinary people become entangled in extraordinary situations, and everyday life bleeds into mythological encounters, alternate universes and dark psychedelic journeys in alien lands where the real and the imaginary are indistinguishable. A treasury of tales told from multiple perspectives and in a multiplicity of styles, XYZT is an audacious cross-genre experiment, a firsthand memoir of what it means to see what "they" see, and a science-fictional, nonstandard engagement with anthropology in which cross-cultural encounters take on all the unpredictable features of a contemporary fairy tale. 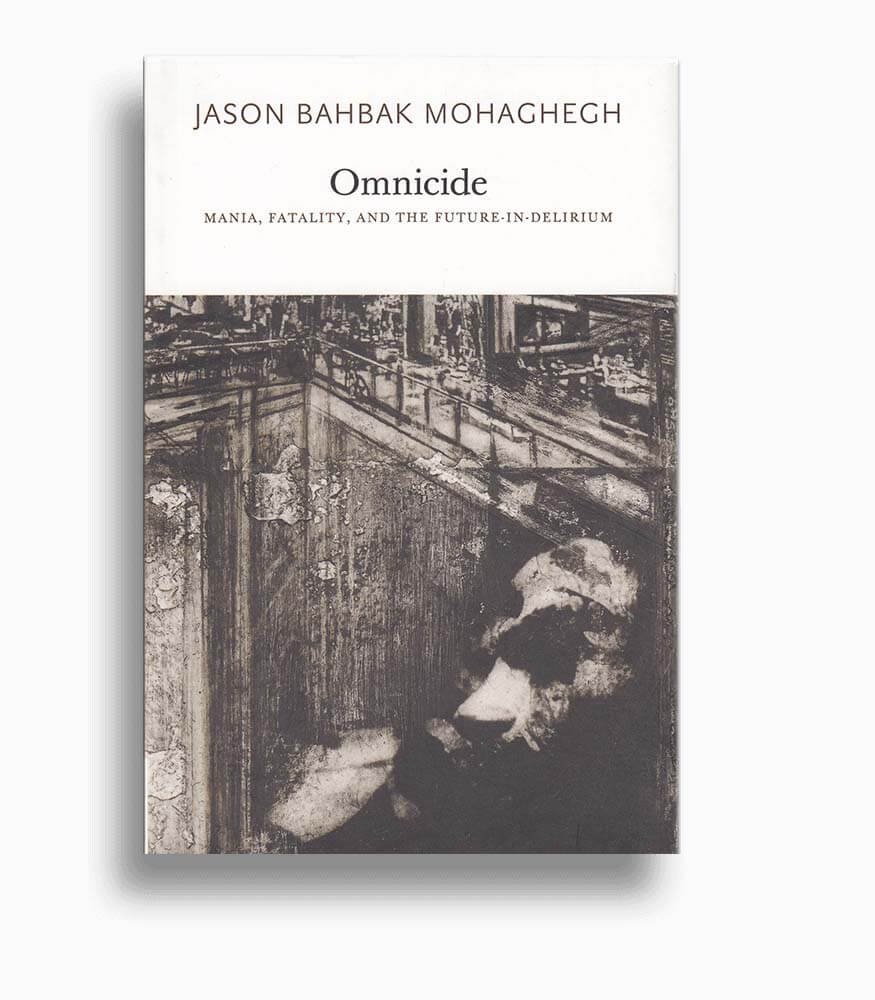 What kind of circumstances provoke an obsessive focus on the most minute object or activity? And what causes such mania to blossom into the lethal conviction that everything must be annihilated? There is no turning away from the imperative to study this riddle in all its mystifying complexity and its disturbing contemporary resonance--to trace the obscure passage between a lone state of delirium and the will to world-erasure.. A fragmentary catalogue of the thousand-and-one varieties of manic disposition (augomania, dromomania, catoptromania, colossomania...), Omnicide enters the chaotic imaginations of the most significant poetic talents of the Middle East in order to instigate a new discourse on obsession, entrancement, excess, and delirium.

Placing these voices into direct conversation, Jason Bahbak Mohaghegh excavates an elaborate network of subterranean ideas and interpretive chambers, byways, and burrows by which mania communicates with fatality. Like secret passages leading from one of the multitudinous details of a bustling Persian miniature to the blank burning immanence of the desert, each is a contorted yet effective channel connecting some attractive universe (of adoration, worship, or astonishment) to the instinct for all-engulfing oblivion (through hatred, envy, indifference, rage, or forgetting).

Startling pulp theory-fictions, forays into cyberculture, occultural studies and popular numerics, paranoid cosmic conspiracy, and schizoid tactics for escaping the reality system recovered from the prehistoric lore of Lemurian Time Sorcery. From before the beginning (which was also, according to them, already the end), the adepts of the Architectonic Order of the Eschaton have worked tirelessly to secure the past, present, and future against the incursions of Neolemurian time-sorcery, eliminating all polytemporal activity, stitching up the future, sealing every breach and covering every track.