by CUNY Centre for Humanities 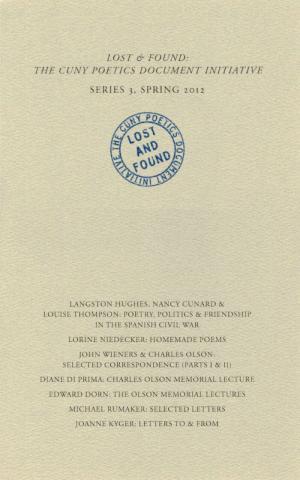 Lost & Found: The CUNY Poetics Document Initiative publishes unexpected, genre-bending works by important 20th century writers. Unearthed from personal and institutional archives in the United States and abroad, these materials are edited by doctoral students at the Graduate Center, CUNY.

SERIES III is a collection of 8 chapbooks that authenticate Edward Dahlberg's claim that "There is more political energy in friendship than in ideology."

Langston Hughes & Nancy Cunard cement their personal relationship by penning notes across the ocean throughout the Spanish Civil War. After meeting at Black Mountain, John Wieners & Charles Olson remain in close correspondence until months before Olson's death. In "Old Father, Old Artificer," part lecture and part evocation of Charles Olson, Diane di Prima helps to establish how key figures in "New American Poetry" were processing their own past, while the breathless Olson lecture by Ed Dorn erodes the fictive dualism that pits poetic theory against practical action. In his letters, Michael Rumaker invites you to share his life, its radiant pursuit of love, "dirty realism," literature, and lasting community, and Joanne Kyger booms "communication is essential" in her Letters to & from. In Homemade Poems, a gift-book mailed to a friend in 1964, Lorine Niedecker insists that the handmade chapbook is the material continuation of the poems so carefully nestled in its pages.

Breaking up the monolith of the historical lens, Series III continues to track individuals as they tell their stories, cast their lifelines, and position themselves in relation to the times they lived in—and the times we live in—through intimate journals, letters, lectures, and friendships. Edited, annotated, and with accompanying essays, The London Review of Books calls this "a serious and worthy enterprise." Diane di Prima calls the series "a gold mine" and Joanne Kyger writes: "What a brilliant cast of characters. Just exactly what one (myself) would like to read." 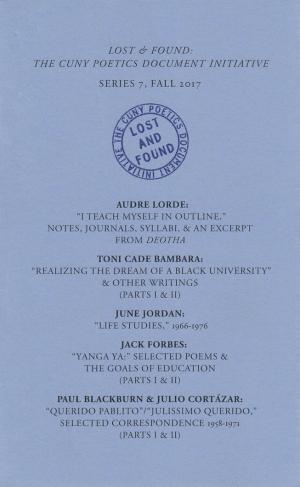 While Cortázar and Blackburn forged their own institution of sorts, through a friendship that would help ignite the Latin American boom, Forbes, Bambara, Jordan, and Lorde worked in and out of institutions to help transform the landscape of our educational and historical horizons and expectations. For some years Bambara, Jordan, and Lorde all taught together in the City University of New York, the largest urban system in the United States, collaborating with activist students and other faculty to create new curriculum in Black Studies, Ethnic Studies, and Women's Studies. At the same time, Blackburn also taught part-time at City University, while bringing the vision of another world into American English, through his translations of Cortázar, a champion of the Cuban revolution and a writer of unparalleled influence in Latin America. On the other side of the country, Dr. Jack Forbes's vision of hemispheric Indigenous life was brought to bear on his involvement in the creation of D-Q University, the first Indigenous university in California, as well as the creation of Native American Studies at UC Davis, a program that would be emulated at other universities in North America. At the same time, his extraordinary and almost unknown poetry, featured here along with notable materials on his educational activism, presents a vision of Los Angeles cutting across race, class, and ethnicity that the work of all the writers in this Series help us realize.

Audre Lorde
"I teach myself in outline," Notes, Journals, Syllabi, & an Excerpt from Deotha

Toni Cade Bambara
"Realizing the Dream of a Black University," & Other Writings (Parts I & II)

Jack Forbes
"Yanga Ya," Selected Poems & The Goals of Education