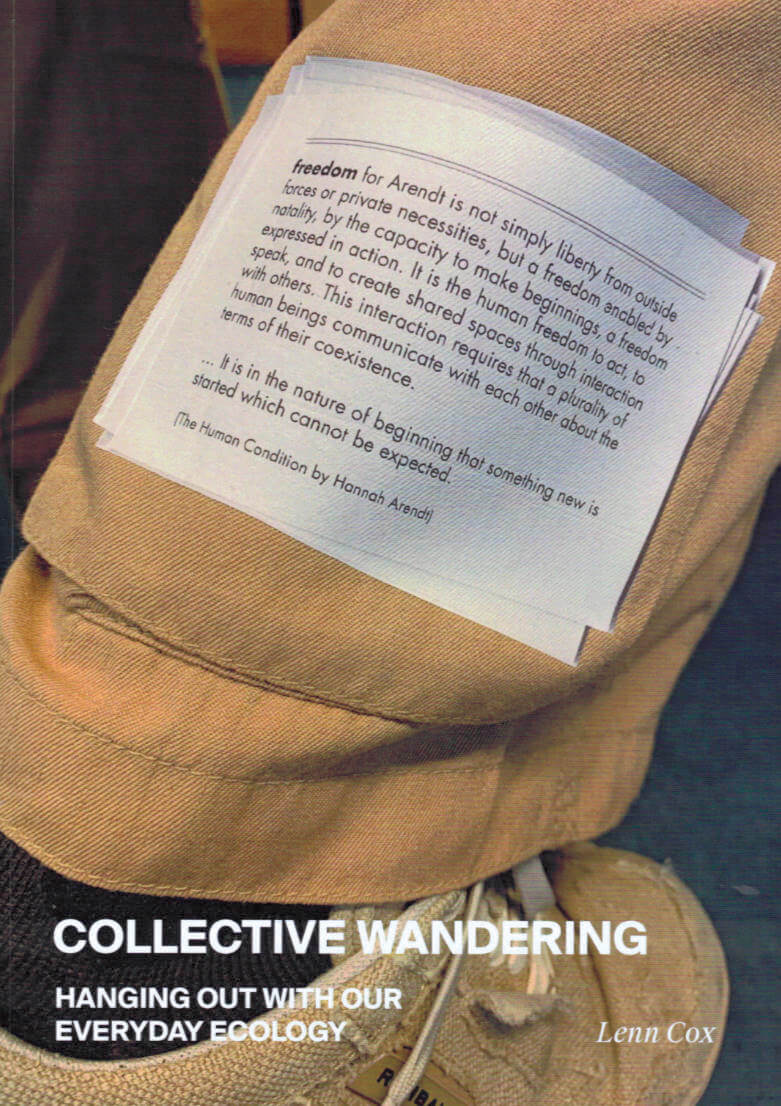 Collective Wandering, Hanging Out With Our Everyday Ecology, is not a manual in the traditional sense, with linear instructions or guidelines - rather, it is a hopefully engaging and activating collection of insights, moments and encounters, experienced during my continuing artistic research On Tour. What started out as a solo adventure consciously evolved into a collaborative and collective journey.

The intention of this manual is to inspire and support kindred individuals who are in search of an alternative rhythm of learning-working-living. Sharing multiform co-production processes and rituals of self-organisation concerning our common everyday lives. 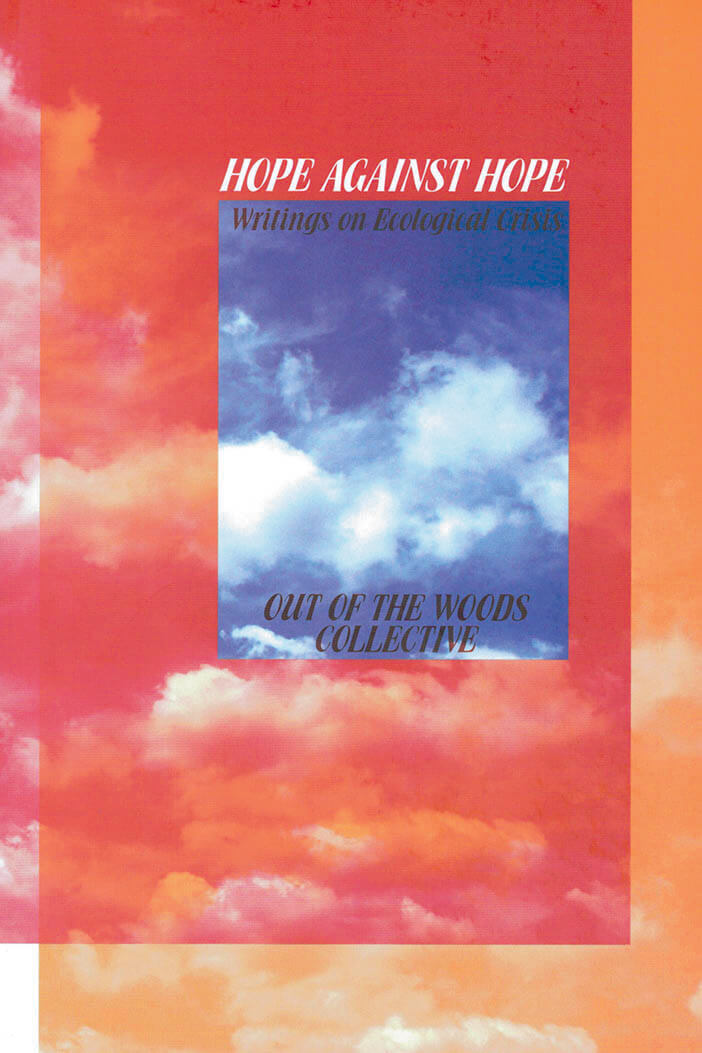 Hope Against Hope
Out Of The Woods Collective
Common Notions - 20.00€ -

In Hope Against Hope, the Out of the Woods collective investigates the critical relation between climate change and capitalism and calls for the expansion of our conceptual toolbox to organize within and against ecological crisis characterized by deepening inequality, rising far-right movements, and, relatedly, more frequent and devastating disasters. While much of environmentalist and leftist discourse in this political moment remain oriented toward horizons that repeat and renew racist, anti-migrant, nationalist, and capitalist assumptions, Out of the Woods charts a revolutionary course adequate to our times.

At the center of the renewed political orientation Hope Against Hope expounds is an abolitionist approach to border imperialism, reactionary ecology, and state violence that underpins many green solutions and modes of understanding nature. It reminds us of the frequent moments and movements of solidarity emerging in the ruins all around us. Their stunning conclusion to the disarray of politics in our seemingly end times is the urgency of creating what Out of the Woods calls "disaster communism", the collective power to transform our future political horizons from the ruins and establish a climate future based in common life.

Out of the Woods is a transnational political research and theory collective, a loose grouping of decolonial, small-c communist, antiracist queer-feminist thinkers working together to think through the problem of ecological crisis. 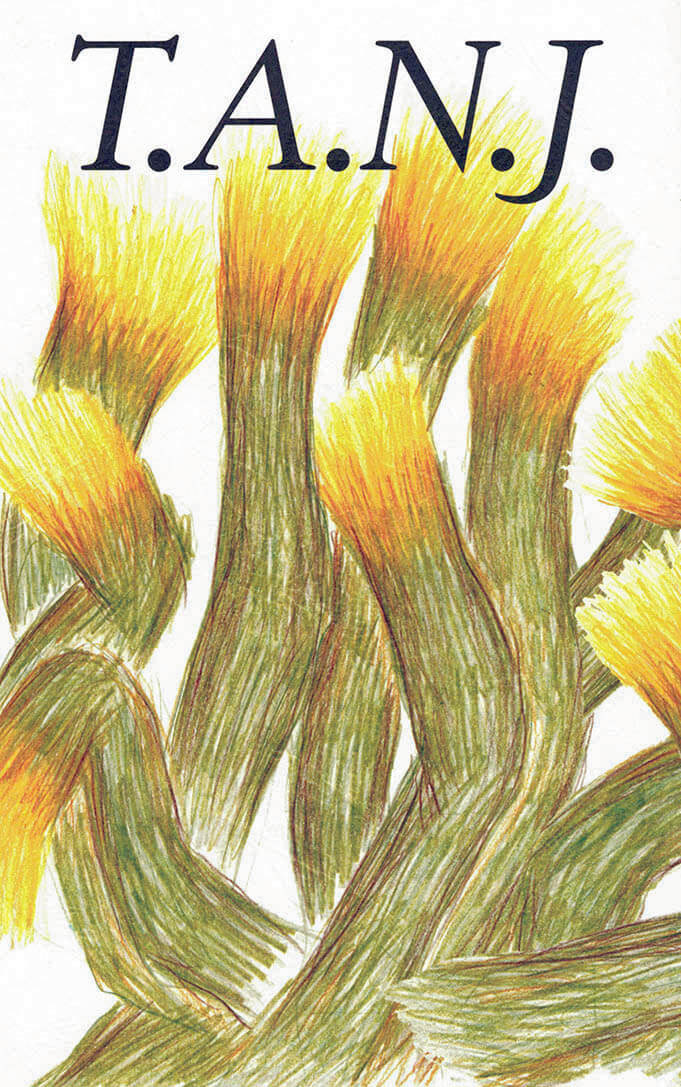 This second issue revolves around the theme of migration, a crucial topic when addressing the forced displacement of LGBTQ+ people from contexts where “nature” is still used to criminalize consensual same-sex conduct or gender expression.

We are honored to publish a new short essay by JASBIR K. PUAR that updates her work on homonationalism. In an interview with Indian activist ALOK HISARWALA GUPTA, we speak of how laws also cross borders, while legal researcher WARUGURU GAITHO and activist CARL COLLISON offer different approaches to report- ing on claims for asylum. FATIMA EL-TAYEB’s vibrant essay invites us to consider the meaning of a queer “we,” while iconic writer and filmmaker ABDELLAH TAÏA tackles everyday xenophobia in France. Poetry by GLORIA ANZALDÚA and DIVYA VICTOR offer personal reflections of homelessness and alienation, which resonate with the special visual contribution by artist ZOE LEONARD, whose photographs focus on the quotidian movements of crossing the river border between the US and Mexico. Historian ZEB TORTORICI addresses the notion of “against nature” through an engagement with the archive, while our Columns section brings news from Brazil, India, Kenya, Lebanon, Morocco, and the UK, in a season marked by the Covid-19 pandemic. 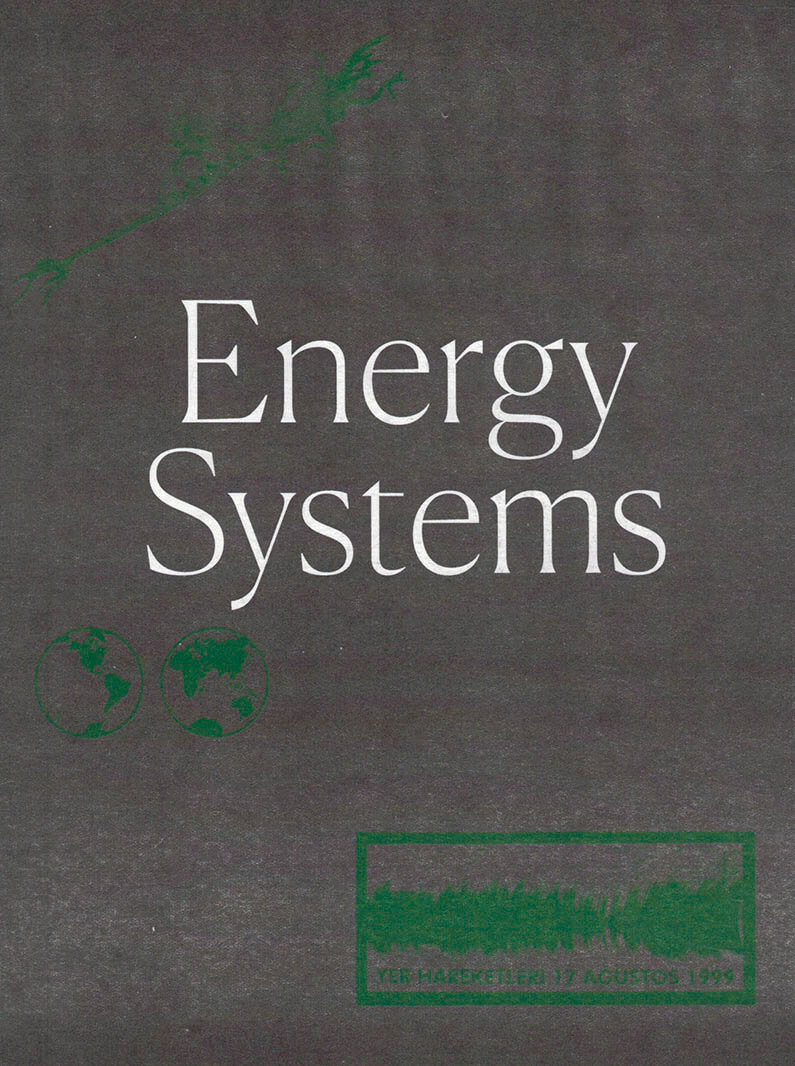 Reflecting on recent ecological shifts at both local and global scales, Energy Systems explores the systems that dominate global infrastructure and the consequences of connectivism under late capitalism; probing correlations between the worldwide drive for connectivity and the emergence of severe environmental rifts.

Energy Systems seeks to find ways of replacing ‘network’ orientated capital accumulation and socio environmental exploitation with ‘metabolisms’ which are orientated toward reciprocal models of coexistence. Through newly commissioned and existing text works by 19 artists and academics, Energy Systems explores a new architecture of values and begins to build stepping stones toward addressing the systemic alienation of the environment.

Energy Systems is released as part of Well Project’s 2020 exhibition programme of the same name. You can find documentation from each exhibition held as part of the programme at: www.wellprojects.xyz 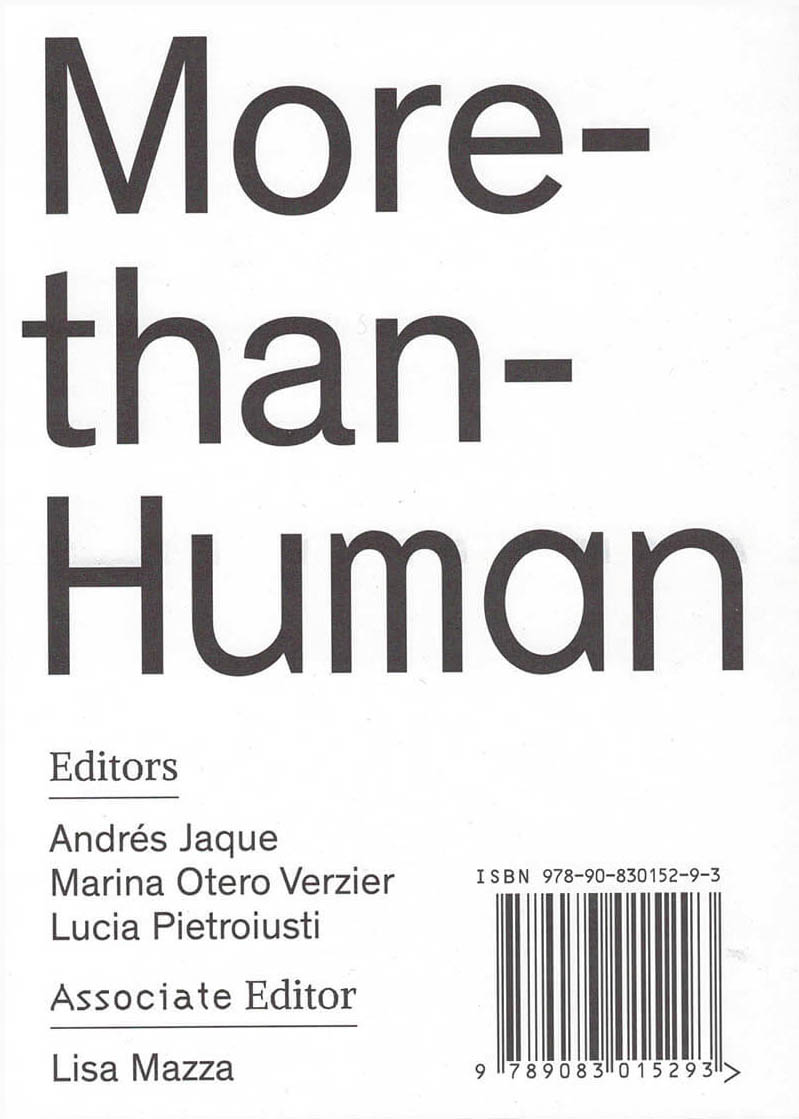 The More-than-Human reader brings together texts that reflect on the state of post-anthropocentric thinking today, by writers from a wide range of disciplines. Focusing on the ecologies and technologies of climate injustice and inequalities, as well as the destructive structures lurking within anthropocentrism, More-than-Human proposes complex entanglements, frictions, and reparative attention across species and beings.

Thinking past the centrality of the human subject, the texts that compose this reader begin to imagine networks of ethics and responsibility emerging not from the ideologies of old, but from the messy and complex liveliness around and beneath us.

Rather than attempting to be a comprehensive compendium on the topic (which would be virtually impossible), More-than-Human provides a cross-section of the breadth and vitality of a literary, scientific, and conceptual milieu where multiple strands of work intersect even as they are frequently regarded as belonging to separate disciplinary discourses. 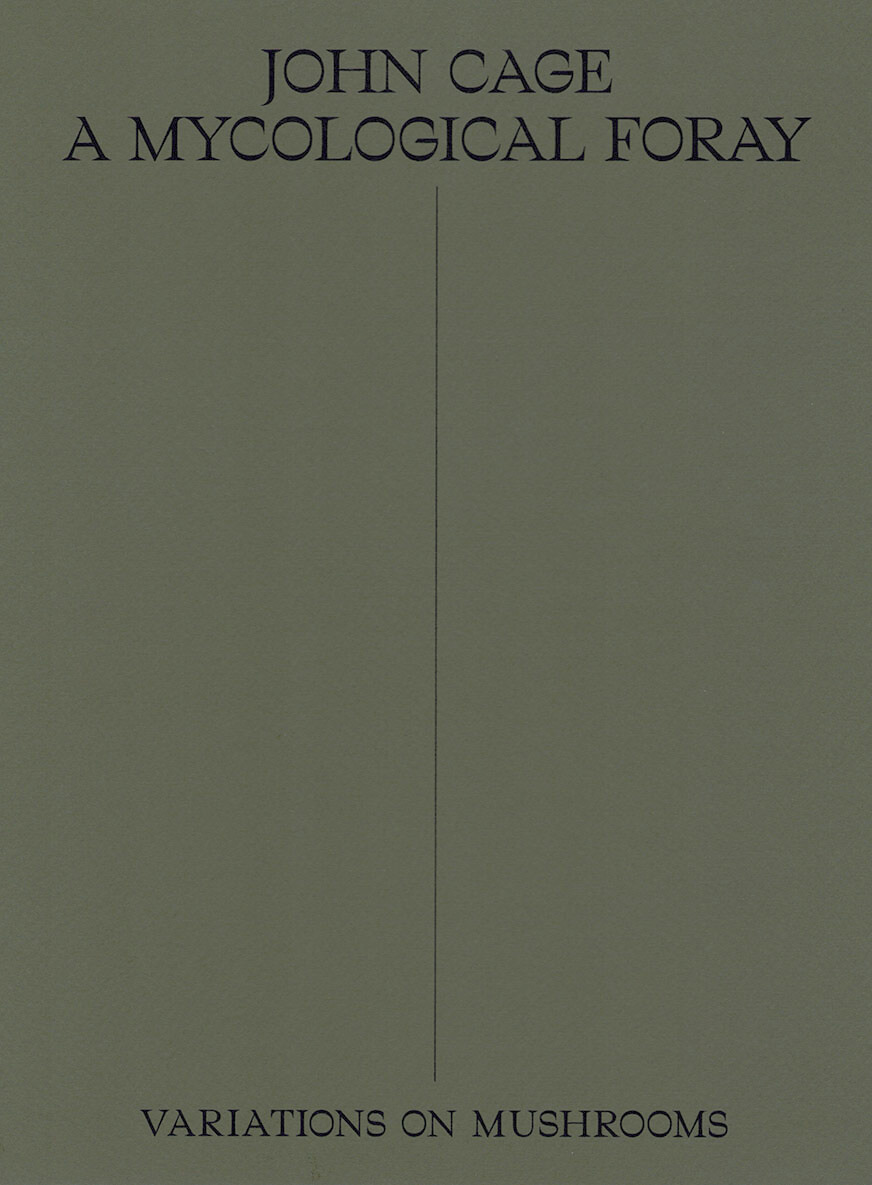 A Mycological Foray: Variations on Mushrooms
John Cage
Atelier Editions - 49.00€ -  out of stock

Foraging for mushrooms with John Cage: writing, art, photography and ephemera from an idiosyncratic chapter in the composer's life

Imagined as an extended mushroom-foraging expedition, John Cage: A Mycological Foray gathers together Cage's mushroom-themed compositions, photographs, illustrations and ephemera. Indeterminacy Stories and other writings by Cage are interwoven throughout the first volume within a central essay examining Cage's enduring relationship with mycology. Also included is a transcript of Cage's 1983 performance, MUSHROOMS et Variationes. The second volume is the inaugural reproduction of Cage's 1972 portfolio, Mushroom Book, authored in collaboration with illustrator Lois Long and botanist Alexander H. Smith. Readers are thus drawn through the landscape of Cage's mycologically centred oeuvre and interests, discovering assorted works, images, compositions, philosophies and ephemera, as one might encounter assorted fungi and flora while foraging.

American composer and music theorist John Cage (1912-92) was a pioneer of indeterminacy in music, electroacoustic music and a leading figure of the postwar avant-garde. His influence extended to the realms of dance, poetry, performance and visual art. 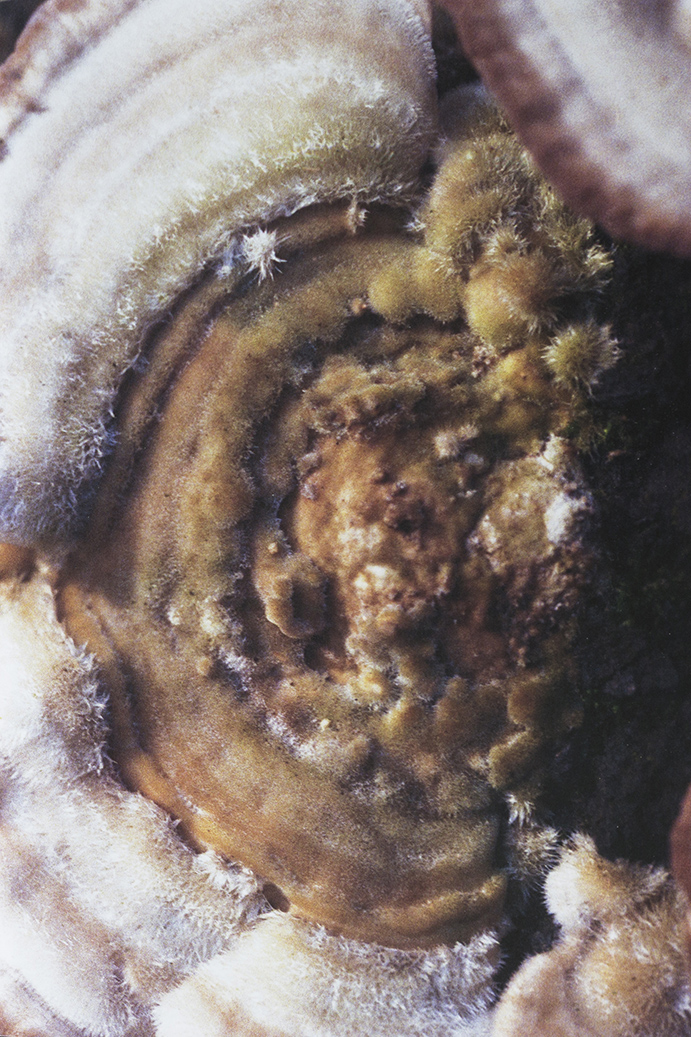 Dries Segers photographed all tangible fungi organisms in Dudenparc Brussels. Fungi are the oldest living species on our planet. They build and spread their communities across human borders continents laws … They take over land without asking permission. They clean up toxic messes in disturbed landscapes and shake the land back to life to create livable grounds for animals plants and maybe humans. They have the power to transport energy between weaker and stronger trees to keep forests alive or to kill them. Their spores are invisible and spread and spread and spread.

“The uncontrolled lives of mushrooms are a gift — and a guide — when the controlled world we thought we had fails.” — Anna Lowenhaupt Tsing